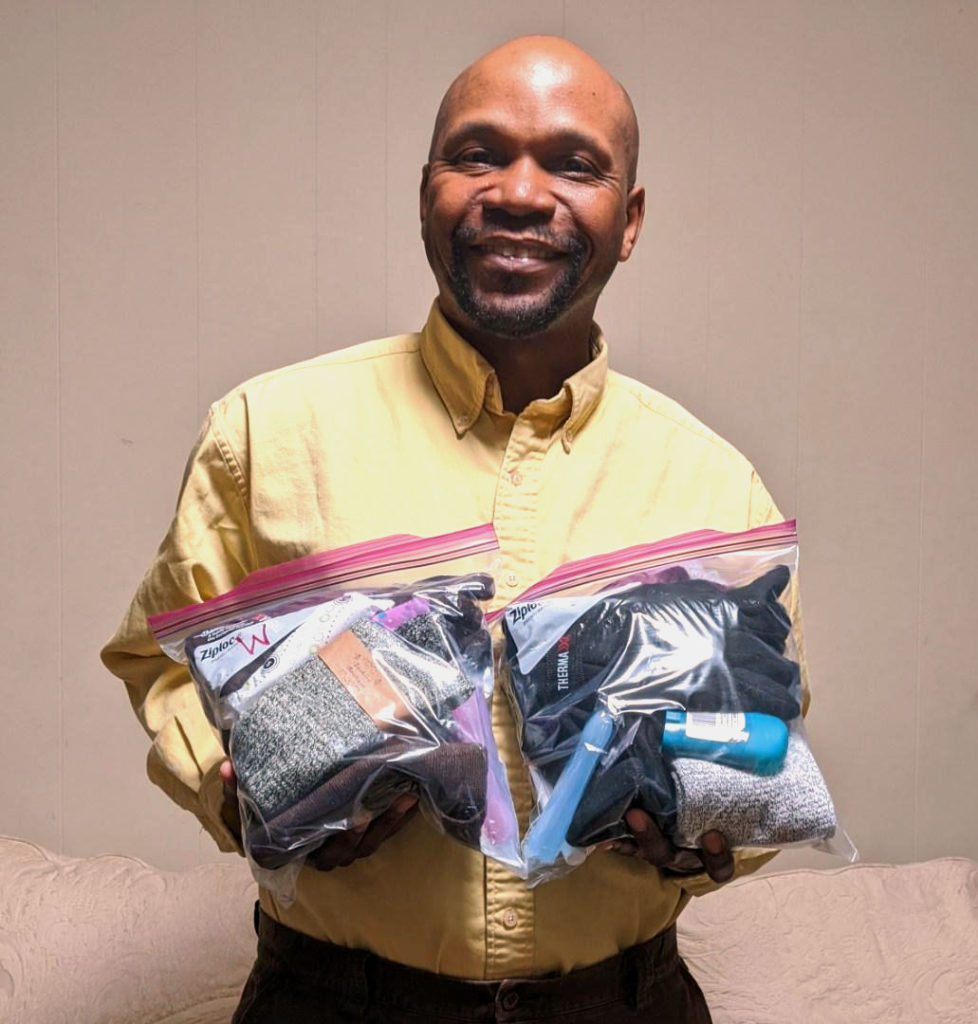 Reggie Williams has worked with people experiencing homelessness for the last several years. Every December, ahead of the holidays, he supports his community by sourcing donations. He dedicates his time and money to provide hygiene products and warm clothing to nearby shelters.
After learning of Williams’s philanthropic efforts, U.S. Electrical Services, Inc. committed to joining him. With the involvement of coworkers the number of donations grew each year – from 40 to 50, and now 70 throughout the last three years.
Williams and members of the USESI central distribution center team donate items such as socks, a winter hat, gloves, toothbrushes, travel size toothpaste, deodorant, and feminine hygiene products. They pull them together in a kit to hand out at Hartford shelters.
Given the cold winters in Hartford, warm clothing is essential for these individuals. When asked what more could be done, Williams said to his colleagues, “…if there is any way we can get donations throughout the year. That would make a difference. There are people experiencing homelessness month to month and they’ll always need these types of necessities, specifically the socks.” In no time, the USESI team was on board. The distribution centers in Stoughton, Middletown, Cranbury, and Landover stepped up to help. Other departments, including SKEA, pricing, IT, finance, PFA, business intelligence, and even a few vendors, joined in to assist.
Recognizing the teams efforts and commitment to give back, Vice President Jim Crabtree and Sr Director of Operations Mark Unkrich offered to match donations, with the goal of increasing their donation to 100 kits.
Williams and his colleagues surpassed the goal by four times, raking in enough donations for 400 bags. Sarah Compagna took the lead in collecting donations and ordering the items for the kits. The items were shipped into the Middletown Distribution Center. There, a team of Reggie, Sarah, Dave Loiselle, and Danielle Arroyo assembled the kits in early June.
Reggie always has kits available in his car. He hands them out to those in need and donates to the local Hartford homeless shelter. Amid the uncertainty of the pandemic, these donations helped others tremendously. Collectively, the USESI team raised $4,299 dollars to make this happen. As such, they were able to include more items in the kits, including three pairs of socks, a reusable water bottle, and two granola bars.
The USESI leadership team would like to recognize and congratulate Reggie Williams, Sarah Compagna, Dave Loiselle, Danielle Arroyo, and every employee who participated. USESI commits to empowering its employees and encourages them to give back to the community. The company looks forward to its continued efforts to support the Hartford homeless shelter and other communities and cities in which it serves.
PrevPreviousU.S. Electrical Services, Inc. Unveils New Website Designed For Enhanced Talent Acquisition Strategy
NextBecome a Leader of Tomorrow By Completing USESI’s Accelerated Leadership Preparation System Training ProgramNext

Updated April 7, 2022     We have been deeply saddened by the news abroad. Russian President Vladimir Putin’s war against Ukraine has challenged our

At USESI, we are committed to excellence and helping every employee become a leader of tomorrow, which is why we offer top-shelf training programs. The